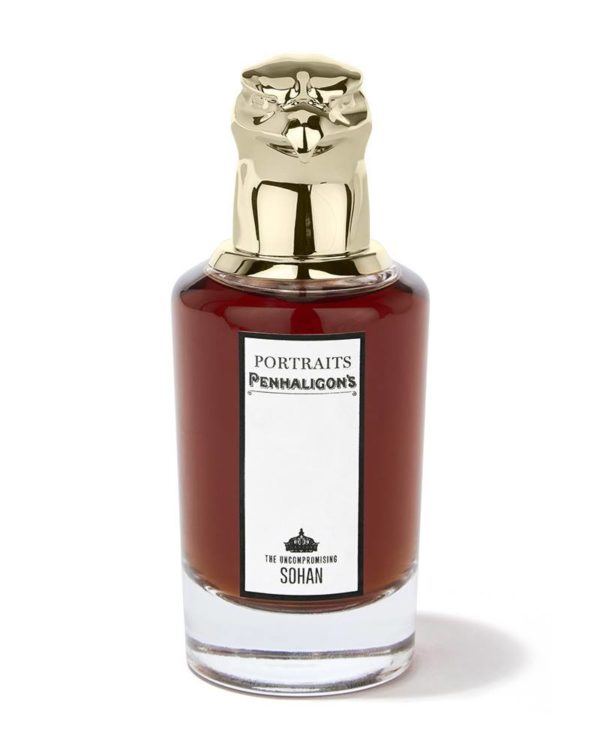 Ambitious, intelligent and astute, Sohan has worked diligently with flair and talent to establish himself in the world of affairs.
A thoroughly unfamiliar rose. A rose with oversized thorns. A rose that knows nothing of coy discretion.
A master key can open many doors.
Smell: Floral and Spicy. Rich and Animalic. Deep and Resinous.

Visionary, ambitious and exotic, this man needs an exacting fragrance. The result is a model of its kind, a masculine rose! This rose alternates between floral, spicy and woody notes. A thrilling sensuality underlined by the animalic warmth of oud.

‘The Merchant of Alexandria’

“They call me the most determined man in Europe.” Some might say that The Uncompromising Sohan has an ego problem, but most are simply happy to bask in his thrilling tales of travelling, trading and Big Business.
He’s built everything from the ground up, something his aristocratic hosts often find utterly fascinating and incredibly exotic. “I was born on the Nile. I think that instilled me with the power of water: I am most often calm, but block me and I’ll spill over the banks.”

You’d be wrong put to think his new circle want Sohan solely for his stories, however. As Egypt’s most powerful and well connected silk and precious gem tradesmen, they adore his gift for conversation, but prefer his gift for giving grand gifts: something he never pays a visit without. “No one man needs so many beautiful things. So I share them. I brought an amethyst for you.”

How he fell into ‘the inner circle’ nobody quite knows, but this well-mannered young man of worldly proportions certainly isn’t going anywhere. “I’ve made it to exactly where I want to be. I might be incredibly young to be moving in such powerful circles, but I certainly don’t plan to stop. Power, to me, is thrilling. It’s something you can trade.”

It certainly is, and Sohan is all about trade. But don’t trade one of Sohan’s gifts: for there is nothing more shameful than re-gifting a delight from the inimitable King of the Jewels. That’s how Lord Percy fell from grace. And while Sohan has the power to beguile most of the people he meets, take one wrong step and he’ll use that power to ruin a reputation. Perhaps that’s why he and Countess Dorothea get on so well. You know what they say, keep your diamonds close, but your diamond dealer closer…